Remember back in 2016 when Pokemon Go was released? The game shattered records for mobile game revenue and downloads. For people who grew up playing Pokemon series on their game consoles, such as Gameboy/NDS/3DS, or for those who grew up watching the Pokemon show on TV, they could not stop wondering if their childhood dream of becoming a Pokemon trainer in real life could finally come true. With the recent rapid development in augmented reality (AR), this had been made possible.

AR can bring the computer-generated content into the real-world environment through projecting or overlaying the digital objects onto a physical object while enhancing users’ senses during their interactions with the digital objects (Chen et al., 2015; Kipper, 2013). Thanks to the development and incorporation of AR technology on mobile devices, people can see their favorite Pokemon emerge on their screens. Moreover, they can interact with Pokemon by tapping onto their screens!

Not long ago, in November of 2019, one of the most popular PC games with a huge fanbase, Minecraft, introduced its first location-based AR mobile game—Minecraft Earth. Unlike Pokemon Go, which allows its players to capture Pokemon at physical locale and then team up their Pokemon to battle with other players at gyms, Minecraft Earth offers players their own AR land, which is a place where they can alter and/or decorate with the items they have collected. Moreover, Minecraft Earth presents a new way of interactions between players, where a group of players can physically engage in a shared AR projected adventure on their devices by presenting at a designated location.

Okay, let’s get a little nerdy and technical for my Edu Tech folks.

Locative media, or location-based media, intends to facilitate location-bound interactions between people and objects in public spaces (Leorke, 2014; Leorke, 2018). The early emergence of locative media came along with the growing accessibility of the Internet, WIFI, instant messages, Bluetooth, and Global Positioning System (GPS) technologies on mobile devices in the everyday lives of people (Leorke, 2014). Locative media is frequently associated with technologies, as it could not exist without the rapid development of mobile devices in recent years (e.g. Wilken, 2012; Leorke, 2014). Some people argue that the growth of mobile technologies distances people and reduces the engagement in outdoor activities (Leorke, 2014). Locative media aims to bring digital media from private spaces into public spaces, repurposes everyday objects at urban locales in virtual worlds and establishes communication and interactions within the community of mobile device users in outdoor physical movements (Leorke, 2014). The digital content of locative media is location-oriented, as people have to be physically present at the location to access the medium; moreover, the devices people can use to engage with in the digital interaction are neither restricted nor location-bound. That being said, people would have the freedom to choose their own devices to participate in the movement of locative media. Meanwhile, the tracking of movement introduced by GPS displays the “spatial process” of people engaging in the locative media at various locations (Leorke, 2014; see Colley et al., 2017 for an example of studying geographic information using Pokémon Go).

Phew, there are quite a few big terms in the last paragraph, but, no worries, here is my simple and easy summary for those of you who did not want to get your hands messy ?

Players may embody the physical space by having their mobile devices facing the object in the real world while interacting with the digital object that has been repurposed with meanings in order to better engage in the location-based game on their devices.

In short, locative media is a movement with the purpose of connecting technologies with human-object interactions that would take place at a physical location. One way to think of it is to bring an artifact inside a private gallery out to the streets so everyone with their own devices can see it as they physically get closer to it at a particular location. For me, it almost feels like the object is “locked” at the physical place and my phone acts like the platform that affords me the access to that medium. Moreover, one of the key themes in locative media is to physically move around in neighborhoods. Players may embody the physical space by having their mobile devices facing the object in the real world while interacting with the digital object that has been repurposed with meanings in order to better engage in the location-based game on their devices.

One thing I like about Pokemon Go and haven’t discovered in Minecraft Earth is the landmarks on the game map that serve not only as the PokeStop for players to collect items, but also include some information about these places, such as a brief history and the direction to get there. For example, during my trip to Philly, I played Pokemon Go at the Independence Hall. (I captured my very first Pikachu in Philly! I can’t remember how many times I wandered around the Pokemon Center and Nintendo company site with no luck of even seeing a Pikachu back in Washington) When I noticed that George Washington Statue was turned into an experience raid gym with four Pokemon ready for battles, I cracked up—I could have never imagined starting a Pokemon battle with the statue of one of our founding fathers of the U.S.

Likewise, the thing I like the most about Minecraft Earth is the opportunities for adventure. For example, if I see an adventure pop up and walk closer to it, I can choose to “play” with it. The adventure land will be projected onto an empty space of my choice and stay fixated. Then, I can walk closer to the land to see more details of it or move further away from it to capture a more general image. It makes me feel like an explorer and more so, that I am part of the adventure.

Whether it is the fixated landmarks in Pokemon Go or the adventure lands in Minecraft Earth, I see a lot of possibilities of the application of AR in location-based games that incorporates real-time traffics and weather. Three years after its first release, now in 2019, the Pokemon mania is still going strong. Bits by bits, Niantic Lab continues to perfect the algorithms to bring more interactive and believable computer-generated AR Pokemon projections into people’s everyday lives. Minecraft Earth, while being relatively new, contributes to the fuss about location-based AR mobile games. Nevertheless, both games are battery drainers—less than 20 minutes of intense play in either Pokemon Go or Minecraft Earth, for me, will result in a dramatic battery drop from a perfect 100% to 10% ?

Could you imagine using this technology in the classroom?

AR has been frequently used as the supplement in educational settings. These kinds of location-based games, perhaps, could be integrated in classes. Students could benefit from physical activities that could deepen their understandings of the subject and enhance their learning experiences. For example, it could be used in a combined class about local history and physical education that students can team up to explore the landmarks in their locale while engaging in physical activities and encounter real-life adventures throughout their journey of learning. In this way, location-based AR mobile games afford an immersive learning environment for students to be the latest participants in the locative media movement.

Special thanks to Dr. Joey Lee who helped to develop the post and my friend Kay Lyu who helped me to take videos and photos 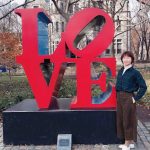 Kari is a master's student in Cognitive Science at Teachers College. She is interested in interactive designs, visual explanations, spatial thinking, creativity, and creative technologies. 😀